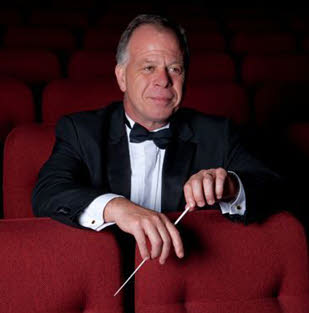 John has been the principal conductor of Shrewsbury Symphony Orchestra since 2006.

John Moore read music at the University of East Anglia and Royal Academy of Music, where he studied piano with Sidney Harrison and Alexander Kelly. After teaching music in Edinburgh for ten years, where he also pursued a career as a conductor with Edinburgh Grand Opera and Edinburgh Music Theatre as well as forming his own chorus, The New Scottish Concert Choir, John also composed for several Channel 4 shows, and appeared frequently as accompanist and continuo player with amongst others, The Edinburgh Contemporary Arts Ensemble, and the Scottish Baroque group, Kist of Music.

John moved to Shrewsbury in 1989 to become Director of Music at Shrewsbury School, a position he held until retiring in 2020 and where he also conducted the Shrewsbury School Community Choir. He was a co-founder with Chris Eldon-Lea of the Shrewsbury Season, and with Chris was also a founder member of the satirical comedy trio, Three Men in a Bow Tie. John was a frequent guest conductor with the Midlands Symphony Orchestra, and with Shropshire Charity Concerts John conducted annual Christmas performances of Messiah in Shrewsbury Abbey from 1989 till 2019.

John has been conductor of the Shrewsbury Symphony Orchestra for fifteen years, is on the committee of the Gregynog Young Musicians Competition where he is an official accompanist, and is currently helping organise concerts for the Shropshire Music Trust. He has also appeared for many years as conductor and chorus master at the English Haydn Festival in Bridgnorth. John has written ten musicals for young performers, winning a Fringe First for Jekyll! in 1995, and has also written music for several BBC and Channel 4 children’s series, including Torch starring Dame Judi Dench, and Moonacre starring Philip Madoc and Miriam Margolyes. 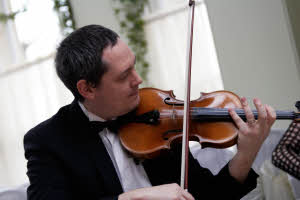 Alex is a freelance violinist based in the West Midlands. He is in much demand as orchestral leader, chamber musician, soloist and recording artist having worked with top chart acts, including appearances on Top of the Pops, BBC, Channel 4, and French channel TF1.

One of his musical passions is modern and contemporary music. For ten years he ran and led the Richmond Chamber Symphony, a group dedicated to playing the chamber orchestra music of the Twentieth Century, with whom he performed Schnittke’s 3rd Violin Concerto and Kaija Saariaho’s Nocturne as soloist. He is keen to introduce Shrewsbury to the amazing sound-worlds that flourished in the last century.

His favourite place is in the depths of an opera pit and he leads many operatic groups, including Park Opera, Guildford Opera, Windsor and Eton, and tours around stately homes in the UK with Candlelight Opera Company. In 2008 he was fortunate to be asked to lead “Toccata”, a charitable touring musical production company; with them he has toured Zambia, India, Sri Lanka, Nepal, Northern Ireland and Kenya, playing dozens of shows and raising money for a number of charities in those countries. He is guest leader with the London Shostakovich Orchestra, more recently in the West Midlands he has led the British Police Symphony Orchestra, and tonight is again thrilled to be leading Shrewsbury Symphony Orchestra. He is also one of the violinists in the recently formed Shropshire-based Jarualda String Quartet.

As a soloist, he has performed concerti by Shostakovich, Prokofiev, Schnittke, Bartok, Ravel, Chausson, Szymanowski, Vivaldi, Mozart (including the Sinfonia Concertante with his wife Jane) and the Beethoven Triple with fellow members of the Toccata band – a far cry from the ‘cheese’ of Broadway and pop music from the seventies and eighties! Hobbies include staying up late with his telescope (astronomy), staying active (containing four youngish children) and mashing malt (brewing beer). His violin is an early nineteenth century copy of a 1732 Guarneri that he calls Kylie.